Been gone so long.

You know, I believe that some people are built for technology and some are not. It's a natural thing. I really wish I were one of these folks, but I'm not. Truth be told when I'm not making things I'd rather be reading, playing with Ramona, drinking with Ronaldo and/or friends, making online shopping carts brimming with J. Crew outfits that I don't intend to buy, washing dishes... really anything other than marketing my work on this or any other online forum. I haven't even tried twitter. Let me be honest here.

This year is already shaping up to be an even busier year than the last, and so I wanted to challenge myself right from the beginning of 2013 to post once a month. I'm not even going to try to post more than that. I'll make it a good one, with shots and words about art, Ramona, LIFE, process, and anything else totally awesome I can think of. Let this be the February edition.

I'm not going to dwell, but my tea towels are getting popular. I wish they were more popular online but if you re-read my opening of this post you'll know why they aren't. I spent a lot of time working on them in November and December, but this month I have more pressing projects and so production is at a complete halt. I am working on a really fun illustration job for some advertising that I will tell y'all about when I can. I'm also working to finish my little sister Martha's wedding invites by the end of February. Busy month, art wise.

My girl has had some life changes in the past few months, namely the loss of her favourite scratching post, our couch. When it became obvious that she had hit the wood base of both sides of the arms and were picking up bits of couch filling from everywhere in the apartment we knew it was time to get a new one. So, we bought a beautiful grey west elm couch. We figured that we had to set up a strong defense against the number one couch destroyer. We sprayed it with cat repelent, we put double side tape on each of the arms, we kept a seat cushion from the old couch, and we put soft paws claw covers over her claws (her least favourite part of the process). To our surprise, she has had no interest in the new couch. She enjoys chewing on the double side tape, but that's it. It makes me a bit nervous about where she is scratching now, but I'll cross that bridge later. That's Ramona's February news.
LIFE

January was lazy for me, life wise. It always is, after the rush of Christmas. At the end of the month Ronaldo and I took off on a tropical escape to Cuba. I spent lots of one on one time with him. I spent no one on one time with my iPhone. I fed stray cats and dogs. I touch none of them because Ronaldo was afraid of me getting diseased. It was glorious, and just what we needed.

AWESOME THING
There is one totally awesome non art related thing that I have to share with you. Ripley's kittens. It's a 24 hour a day live stream camera on an animal shelter cat and her kittens. It's being filmed somewhere in mid west US by an awesome guy, foster Dad John. You've GOT to check it out. You will LOVE it! 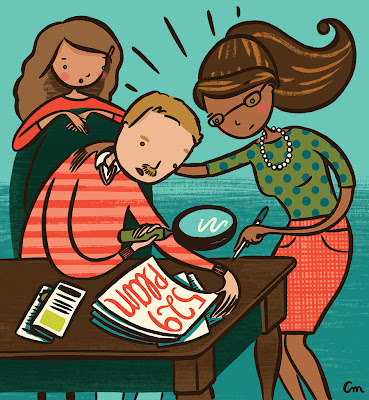 That's it 'til March! Ciao!