A little more from ICON7, and a little from the home front.

Another week has slipped away. Although I am more than back to normal home life I am still savouring my time away in Providence at ICON7. I am going to continue sharing bits from the event until there is just nothing left to share, but I'm going to do it along side home life too.

I'm going to start with a little conference talk, more specifically the ICON7 Rhode Show, which I was fortunate enough to be a part of. The concept of the show is pretty simple. Display your beautiful work for the illustration world to see, and sell a little (if you want). Though there were a few Rhode Island sales tax heart attacks for this Canadian girl, I was able to sell my tea towels as well as show my portfolio. Thank goodness for that, because they sold like hot cakes! I never posted the new designs, did I? Well, here they are! 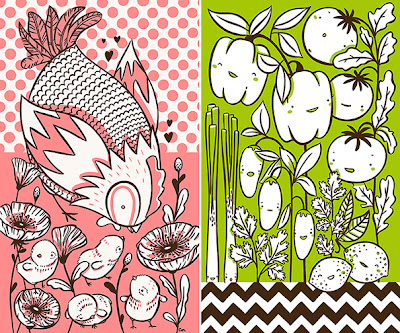 You might say it made me a bit happy that everyone liked my work so much.
All of the folks that came around to check out my stuff and have a quick chat with me were lovely. I particularly enjoyed speaking with recent grads and looking at their work. They are a refreshing bunch. I can't believe it's been eight years since I graduated. Seeing them reminded me that I can't just sit on the couch and watch Master Chef (though I love it). Doors must be knocked and art must be made! I also had a few personal super stars pick up an absorbent Claire Manning original. One of the first people to drop by was Susie Ghahremani of Boy Girl Party fame. Yeah, that's her website on the list of things that I love. What do you do when a total inspiration buys a piece of my work? I was a total nerd, and way too excited to see her and Julia Rothman, who was browsing the show with her. I've really got to work on acting cool. One day I hope that I can license my art as successfully as they have. My major moment of the night was when a woman came by and asked if I could set aside 3 sets of my tea towels while she went and got her cheque book. No prob, I thought. Well, "cha-ching!" is what I really thought, but when she came back and I read the name on her cheque I realized it was Lynda Weinman.

As in THIS Lynda. 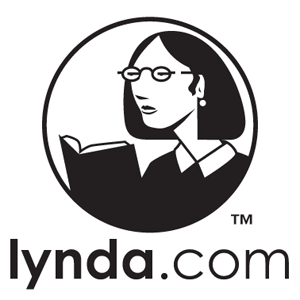 She even looks like the logo a bit! Upon this discovery I threw all three sets of towels in the air and lost the ability to count and organize. It took me fifteen minutes to take the cheque and get the towels in her bag. I believe that Ronaldo taught himself After Effects with the tutorials at lynda.com. She is a legend. I was also visited by Dan Santat and Adam Rex, amazing children's book illustrators and authors. I am embarrassed to admit that I had not heard of them before the conference, but I am now a super fan of both of their work.


Another important visitor to my set up was Amy from Craftland, an absolutely amazing craft/art/awesomeness store and gallery space owned by the one and only Jen Corace. Amy suggested that I drop by the store and consider submitting a vendor proposal because she thought my towels would fit well in amongst the rest of the awesomeness. So, on my final day in Providence, and my only free day to explore the city I found Craftland.


It was as cute on the outside as on the inside and I loved it. 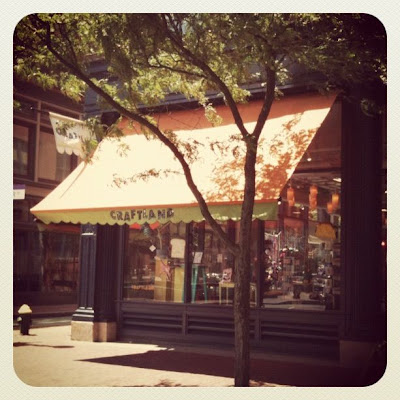 I have since applied and am awaiting a reply!

Craftland was the highlight of that day. I was pretty hung over from the conference closing party which didn't help. That wasn't the main reason I was a little bummed with Providence. It was the number of bums in Providence that bummed me out. The town seemed empty except for clumps of drifter type folks hanging out everywhere. I assume that in the school year with everyone around it's not as odd. I felt, firstly, that I likely looked like I belonged in their crowd, and secondly, a little unsafe, even in broad daylight. Every street was pretty much void of people. I ran into a particularly vocal homeless woman down one of these streets. She was yelling at a homeless dude that was walking away from her. She got louder the further he got from her. I stopped to look in a window just so I could listen to her insane rant. It was amazing. So much so that the first thing I drew in my sketchbook when I got back to the T Dot was her rant, just so that I could get it in writing. I didn't get a good look at the scene because I didn't want to draw attention to me so I replaced the homeless folks with cats, of course.

I put my sketchbook on my studio floor to take a few pictures and, like clockwork, my super model cat came around for the photo shoot. 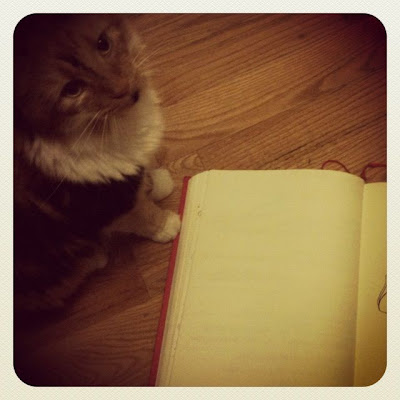 I just went with it. Work it, Ramona! 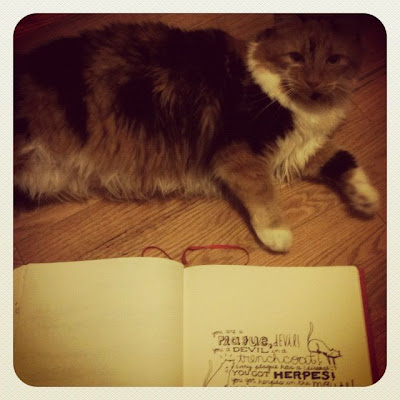 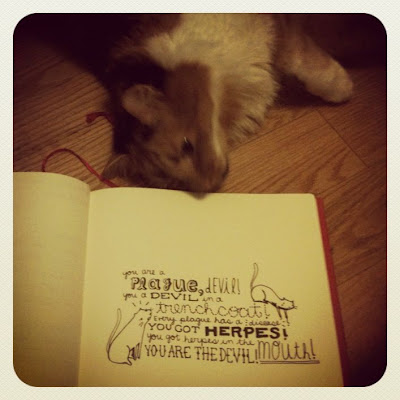 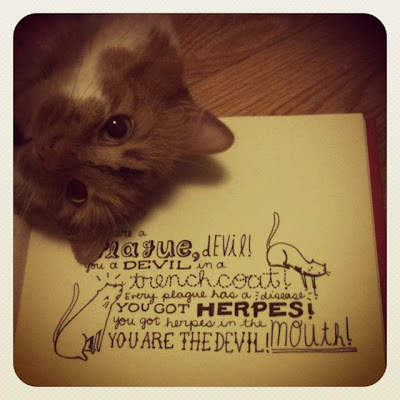 A very happy fourth of July to all you fantastic Americans out there!